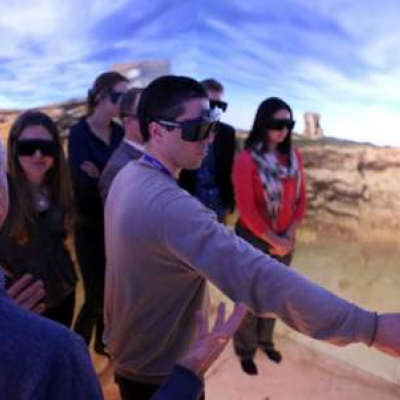 Combining archaeological fieldwork with three-dimensional technology, the 3D Catalhoyuk project provides a reconstruction of all phases of the Catalhoyuk, Turkey excavations, along with 3D data recordings of the most important artifacts.​

Catalhoyuk, Turkey is the largest and best-preserved Neolithic site ever discovered. It was a large proto-city that flourished for nearly 2,000 years before being deserted around 5700 BC. During those 2,000 years, many buildings were destroyed and built over once again, creating layer upon layer of artifacts.

The researchers have data stretching back several years, which presents a unique opportunity. As archaeologists excavate the site, they necessarily destroy each of these layers in succession. This can make it difficult to remember what previous layers revealed, and how they might all fit together in the deciphering the story the lives of these ancient peoples left behind. Preserving the progress of the excavation gives researchers the unique opportunity to revisit the site as it was years earlier, putting the entire decades-long project in perspective to reveal new insights.

Maurizio Forte, professor of art, art history and visual studies at Duke, has been the director of the 3D-Digging project at the site in Catalhoyuk, Turkey since 2010. Forte has partnered with Regis Kopper, assistant research professor of mechanical engineering and materials science at Duke, to develop a digital project based on the excavation work and to take advantage of Duke’s DiVE facility.

Each year, beginning in 2010, Forte and his team traveled to the Catalhoyuk site and created a digital blueprint of their dig using laser scanning technology to get digital elevation data and photogrammetry—the superposition of many photographs to create a 3D point cloud—to create 3D models of the excavation. After three years of creating these elevation and 3D models, Forte provided the data to Kopper who created one final model, using software built in-house, that can be explored in virtual reality at the DiVE.