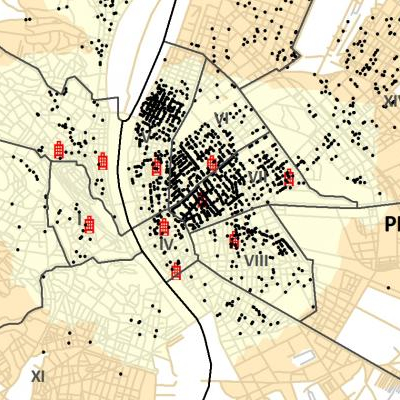 "The Holocaust Geographies Collaborative is a multi-institutional, collaborative research group that uses mapping and geography to examine spaces and places of the Holocaust. The group came together in 2007 at a workshop hosted by the United States Holocaust Memorial Museum to discuss how geography, mapping and geo-visualization can shed new light on the history of the Holocaust. So far, the Holocaust Geographies Collaborative has examined several topics: the spatial system of concentration camps; an architectural and visibility study of Auschwitz; victim transports to Italy; forced evacuations from Auschwitz at the end of World War II; and a detailed study of the Budapest ghetto. In their research, the group creates maps and other visualizations (geographic information science, or GIS) illustrating where events of the Holocaust occurred, where and how people moved from place to place, and other data. For example, the group created an interactive map showing the locations of all the concentration camps in Europe and when they opened and closed over time."